Today is a very special day (besides being two days til Christmas) because it’s my 1st Bloggerversary. Exactly one year ago today I began this blogging hobby of mine, and I’m sure you can all relate when I say that I had planned to use every waking hour to blog! Sadly my more taxing commitments in life prevented me from doing so, but nevertheless I have loved blogging and discovering other blogs. So thank you to those of you who have either read one, two or all of my blogs posts. Watching my Stats grow over the past year has really made me smile :)

In today’s post I want to focus on one particularly interesting gift a friend gave to me- Herman the German Friendship cake. I thought this would be an appropriate blog post for all the new blogger-friends I’ve made over the past year. [WARNING: If you lack patience then this recipe is not for you!] …When I was handed the bag I was told that the cake hadn’t been baked yet; it was in the form of a Sourdough yeast and it had to be looked after for a number of days before I could bake it. Without a moments hesitation I took Herman home and got myself acquainted with the instructions…

I soon discovered that this recipe was much more like a Science project than anything else- it would be 9 days before I could even bake the cake, and in the meanwhile all I had to do was keep the yeast alive. Simple, right? The instructions read as follows:

Day 1: Put me in a large mixing bowl and cover loosely with a tea towel.

Day 4: Herman is hungry. Add one cup each of plain flour, sugar and milk. Stir well.

Day 9: Add the same as Day 4 and stir well. Divide into 4 equal portions and give away to friends with a copy of these instructions. Keep the fourth portion. (It was on this day that I found out my friends were not as enthusiastic about Herman as I was!)

Yep, it’s not until day 10 that you can really begin to get to work on Herman, but by this time it will occur to you that you’ve kept Herman alive, and all you want to do is bake him! Yes, somewhat sadistic, but cake is cake.

The recipe required me to add apple chunks, melted butter, spices and oil, to name a few. After watching Herman bubble up and grow inside the bowl for the past week I was not surprised to see that the cake batter was not so attractive. And so I waited patiently for the cake to bake, ready to expect the unexpected in terms of taste and appearance… Herman came out of the oven like a heavy weight champ, round and firm on the outside and soft as a cushion when cut open. The apple chunks covered the entire surface and sides of the cake, bobbing their heads amidst the golden brown edges of the cake. Some of the brown sugar had crystallized on the cake top, which gave Herman that little extra crunch.  Having used oil instead of butter, the inside of the cake was extremely moist to touch, unlike most ‘common cake’ recipes that use butter and can either dry out or crumble if not baked well. Now, while some may say that this cake is an acquired taste, I shared my cake with a number of people and they all seemed to love it :)

Though long-winded and tricky for some, Herman the German Friendship cake is a fun and different way to bake. Check my Recipes page for the full recipe, as well as the Starter Mix (if you want to be the first one to start the chain.) Good luck! 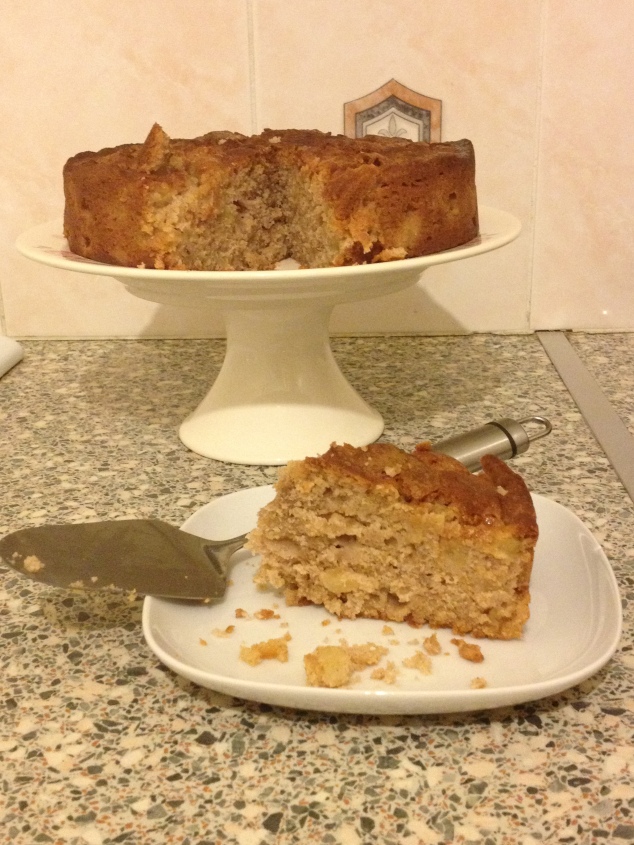